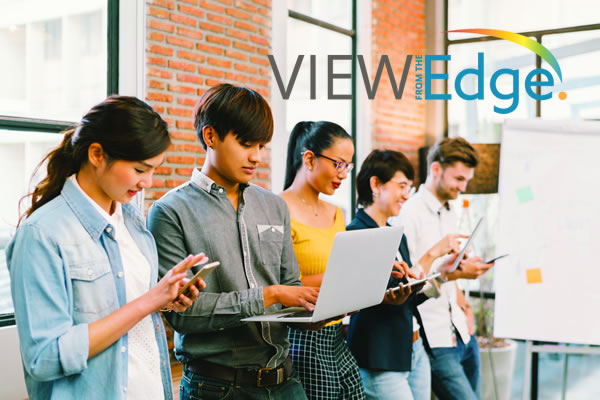 ArticlesView From The Edge - Fall/Winter 2019

For over four decades, Robert Mondelli has been walking the halls of Passaic County Community College (PCCC) in Paterson, New Jersey. The current Vice President of Information Technology on campus, Mondelli officially became a Panther when he enrolled as a student in 1975.

Mondelli rapidly made his mark and enjoyed the data processing coursework and other college studies. In May 1979, Mondelli was ready for the world and had a job lined up. However, the initial post-graduation plan quickly changed. The Data Processing Chair at the time approached Mondelli and asked if he’d be willing to interview for a job opening.

“Through the years, I had become pretty good friends with the Chair. He called me after graduation and asked what I was doing and if I’d come in for an interview,’” Mondelli shared. “I told him I had another job and was happy with where I’m going. He said, ‘Oh, come on in!’ I went in for the interview conducted by several faculty and I was hired right on the spot.”

One of Mondelli’s early challenges was the lack of a computer system. PCCC used a time share for computers until they received a grant to purchase a mini-computer. Mondelli’s May hiring was the prequel towards the computer purchase in June, and he installed the device in September. Programming languages were then offered that fall semester.

“I always tell this story when I’m hiring new staff, because this computer was one of the first real pressure situations I encountered,” he said. “I had no one to lean on for expertise. I took some training from the company and by September, I had the mini-computer and COBOL and Basic Assembler installed. This software allowed the College to hold computing classes.”

Another big challenge took place in 1985, when PCCC was one of the first New Jersey schools to purchase an Enterprise Resource Planning (ERP) system named Colleague from Elluican. “Another story I tell people is there are few software packages still used 35 years later,” Mondelli added. “While the package has grown and modernized over the years, we are still using Colleague. It’s still the same company and same ERP” Currently, over 600 U.S. schools use Colleague, as well 16 New Jersey Community Colleges and nine public and private schools.

Since PCCC hired Mondelli and the college’s first mini-computer was installed in 1979, technology has drastically transformed how higher education enables students to learn and grow in their fields of study. Students expect to be educated in new ways that weren’t available ten to twenty years ago. “Not long ago, students wanted laptops. Today, iPads and mobile phones are the desired devices,” Mondelli said. “Students also want strong wireless connection and the ability to connect easily. I feel as though higher education needs to adopt technology a bit quicker which could help us educate our students.”

Flash back to fifteen years ago and computer rooms, laptops, and a library were necessary for college students. Because PCCC is an urban community college, many students came without their own computer. PCCC equipped computer labs across campus so students had access to computing and the Internet. In today’s environment, however, everything has turned mobile and students have a phone. Students register for class via their mobile device, as well as go on Blackboard. “Students want to have the same experience they used to have on a desktop or laptop, but now on their phone,” Mondelli explained. “The biggest challenge is to create the same type of user experience for the mobile phone. This mobile experience is a big student expectation; they want the service and they want it now.”

Students now come to campus with anywhere from two to four devices, which requires PCCC to have enough bandwidth space. Mondelli monitors the bandwidth hit, and when appropriate, he increases the circuit used to connect to the Internet. He said every year the circuit gets bigger and network needs boosted.

New apps and technology also comes into fruition every year, many services Mondelli never thought possible in the past. “So many ideas weren’t even in somebody’s head 20 years ago. I’m amazed how technology has pushed innovative ideas,” he said.

Currently, cloud computing and services are changing higher learning and other industries. Mondelli feels the ERP and servers will be on the cloud in the future, which means hardware will change. More attention will be focused towards the network and wireless connections. “The new Wi-Fi (5g) coming in the future will probably eliminate wireless routers in your homes and everything will come via the street,” Mondelli believes.

Another aspect evolving on college campuses is enrollment sizes, which has also impacted Mondelli’s job position. Four decades ago, the amount of students on PCCC’s campus was 1,100. Today, there are well over 9,000 students in all new buildings across multiple campuses. The primary campus is in Paterson, but PCCC also has campuses in Wayne, Wanaque, and Passaic, all needing to connect to each other.

Mondelli embraces this constantly changing environment, as higher learning requires the ability and willingness to adjust to innovative change.

“The advice I would give a new CIO is if they aren’t willing to change, this job isn’t for you. Getting comfortable in a CIO role might involve ‘unlearning’ something you learned in the past, which for me is what first interested me in the position,” Mondelli said. “I like how the job continues to evolve and is always different.”

A CIO needs to be aware of technology trends and understand people skills. A person may be able to talk technology, but in a CIO role, he or she must also be able to talk in a way where jargon isn’t required in an explanation. “When I speak with faculty and staff, I don’t talk at a level that won’t make sense, but rather in a way they can understand,” Mondelli said. “I believe being able to communicate the correct way to the masses is one of the most important things of the job.”

During staff meetings, Mondelli asks everyone to leave their phone out of the meeting room. He doesn’t want to be interrupted by devices going off or not having the full attention of meeting attendees. At times, he asks his staff to disconnect from technology to encourage face-to-face interaction. He explained, “I don’t bring in my phone to meetings and as you can imagine, I’m always on the phone or the tablet.” He continued, “I tell people to text me because doing so is the fastest way to get to me. But during the meetings, I want to totally disconnect from even that. I want to interact with people, not with a machine.”

In order to keep up with technology changes and pace with student recruitment, education and retention, PCCC has embraced ongoing campus enterprise infrastructure changes, especially when computer labs are almost obsolete today and mobile technology is the desired technology tool. PCCC has transformed their infrastructure to incorporate increased bandwidth and wireless connections. Mondelli no longer uses regular PCs and has virtual desktops for students and staff. A phone or tablet enables them to use the virtual device, which can also be used at off-campus.

Another challenge often wrestled with involves knowing which improvements or expansions are needed to attract, recruit, educate and retain students. Mondelli is asked daily by students about the newest technology or service going to be offered and whether it will be available through the established learning management system, a virtual desktop or other outlet altogether. “These are questions I was never asked before. Students want to know if these access points are going to be offered, rather than having to get the services on their own,” Mondelli added. “All we do needs to be done at the right pace so we can expand the network and the infrastructure to keep up with student requests.”

Mondelli remembers life before Edge’s support and appreciates how the non-profit consortium has brought technology into the schools, as well as the tools and technological solutions being used to help higher education.

“I tell my other CIOs if you have an idea or something you think would help us sector-wide, you should go through Edge because they have the means and protocol to bring the solution into play,” Mondelli said. “There’s strength in numbers so instead of us all going out individually and trying to get a new service or feature by ourselves, going the consortium route is, by far, the most comprehensive approach.”

Mondelli remembers 15 years ago when Edge brought the Internet to New Jersey, securing Internet services for the state. From there, Edge helped bring the Blackboard solution option for their clients, as well as countless other tools.

“I believe that getting 15 schools together is a far better approach because we then gain more leverage,” he added. “Partnering with Edge makes the process easier to provide services and lowers costs for everybody, which allows us to provide more resources for our students.”

Technology Management Can Be Stressful

Managing technology can keep a person up at night, especially in regards to the critical nature and role of technology on campus. Systems need to be running 24-7; when they go down, pressure builds and solutions need to be found. Back-up systems are always running in the background.

Staffing is another major concern for Mondelli, as the goal is to keep the right type of people on staff. “Right now, there’s a negative employment rate on the technology side which makes recruiting talented people a real challenge,” he explained. He went on to say how all of the newest and greatest technology could be purchased and installed, but if a school doesn’t have good people supporting the tools, maintaining the service is extremely difficult.

Mondelli doesn’t normally hire somebody during the first interview; he takes his time and will have the person sit down with him four or five times. He wants to get to know the interviewee and see if he or she is a good fit. He will also hire students, starting them first as a work-study student or part-time. He and other staff are able to groom these individuals into future openings. He will visit the upper level classes and recruit, which has become a great pipeline. For instance, Mondelli’s associate director was one of his work study students back in 1996, rising up through the ranks one position after another.

“When I get someone as a student, they have more appreciation for what happens and they stay. They work harder,” he said.

Mondelli will also get referrals from other co-workers, saying “I have this student manning the help desk center, and when they get calls, they’re the ones that go out and help faculty or staff with their computing problems.”

“This is where it starts and where they learn,” he said. “We groom the good candidates that come along. They start at the lowest rung and work their way up – learning all the while, which is exactly what I did.”

Mondelli learned about technology before there was a computer on PCCC’s campus. By being a powerful communicator and an educator who works hard to embrace change, computer information technology has thrived under Mondelli’s watch at PCCC—four decades long! As of December 31, 2019, Bob’s four decades at PCCC will come to a close as he sets off for his next adventure—retirement. Join the entire Edge team in thanking Bob for his commitment to the higher education community.